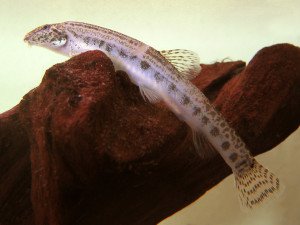 Around 450,000 years ago, the River Trent as well as many large European rivers once drained into a vast river valley that is now the English Channel. The Spined Loach is a rare survivor of this time and are only found in rivers in eastern England, which were once connected to this river system.

From 8 to 10cm long, the spined loach is generally found on the bottom of rivers in areas of slow-flowing water. It has a slender body and a two-pronged spine in a pocket at the rear of each eye which give the species its common name. During the day it half buries itself for protection and at night sieves sediment, eating small creatures and ejecting the silt through its gills. The River Mease has extensive beds of submerged plants along much of its length which, together with its relatively sandy sediments, provide good habitat for the species.

A study undertaken by the Environment Agency identified that the Spined Loach from the Rivers Mease (Trent catchment) and Witham (Witham catchment) were the most genetically distinct from other Spined Loach elsewhere in Europe.

You are here: Home / Wildlife / Spined Loach
Scroll to top