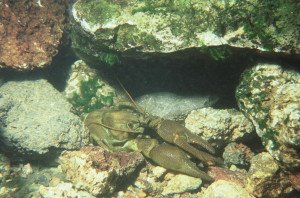 The UK’s native crayfish look like tiny lobsters but only grow up to around 12cm long with large claws that are creamy coloured underneath. They typically live under rocks, logs, among tree roots and holes in river banks. Crayfish forage for food mainly at night, eating anything from invertebrates and carrion to water plants.

The white-clawed crayfish is sensitive to many kinds of pollution and is under threat from the North American Signal Crayfish which is a carrier of crayfish plague, an infectious disease to which our native crayfish has no resistance. Introduced to the UK in the 1970s for the fishery industry the aggressive North American Signal Crayfish also out competes our native crayfish for resources such as food. These two factors have contributed to a devastating reduction the numbers of native crayfish. As such this species has been designated a UK Biodiversity Action Plan priority species and became classified as globally endangered in 2010.