Trent Rivers Trust (TRT) are looking for volunteers to become River Wardens along the River Mease SSSI. The invasive species Himalayan Balsam has been widespread among the banks of the river in recent years. It out competes the native flora of the bank side resulting in poor species diversity and increased erosion risk. It can spread very quickly, particularly along rivers and watercourses. TRT have removed large areas of Himalayan Balsam in recent years but now need help to locate any future plants and remove them.

River Wardens will be introduced to landowners and allocated their own stretch of river to observe and monitor any changes, note wildlife and remove Himalayan Balsam. Training and support will be provided by TRT.

Important note: You must always have permission from the landowner before walking along a river bank and only remove plants if it is safe to do so. 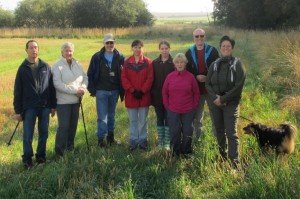 In September Alan Graham met with 8 volunteers on a stretch of river near Clifton Campville to introduce them to the scheme and explain what is required of the role. Volunteers can commit to as little or much time as they want to, choose the area that they want to monitor and can work in pairs or small groups. They have now been introduced to local landowners who are willing to participate in the scheme.

You are here: Home / How to Help / River Wardens
Scroll to top